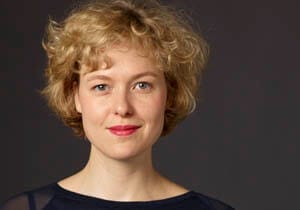 Jana Burbach was born in 1985 in Munich and raised in Bonn, Lon­don, and Ber­lin. She now lives and works in Ber­lin as a script writer in Ger­man and Eng­lish. From 2004 to 2007, she com­pleted a BA in Clas­sics and Eng­lish at the Uni­ver­sity of Oxford and from 2009 to 2011 an MA in Expan­ded Theatre at the Bern Uni­ver­sity of the Arts. In theatre, she has worked as an assist­ant dir­ect­or, dir­ect­or, writer and dram­at­urg with artists includ­ing Con­stanza Mac­ras, Lola Arias, Daniel Hell­mann, Quan Bui Ngoc and Samuel Schwarz. Since 2013, she has focused entirely on writ­ing for the screen, par­tic­u­larly on seri­al­ized storytelling with a writers room approach. From 2013 to 2014, she par­ti­cip­ated in the Dre­hbuch­werkstatt München and from 2014 to 2015 in Seri­al Eyes at the dffb, Ber­lin. Since then, Jana Burbach has been a staff writer for the award-win­ning series Bad Banks (ZDF, Arte), the head-writer for sea­son 1 of Die Hei­l­and (ARD), the co-cre­at­or of Just Push Abuba (ZDF Quantum) and a staff writer for Break­ing Even (ZDF Neo) and Tribes of Europa (Net­flix). She also teaches seri­al storytelling reg­u­larly at film schools and fest­ivals and is increas­ingly work­ing on her own ori­gin­al shows.